Cider made the traditional way. 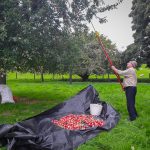 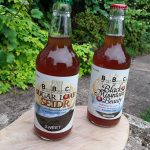 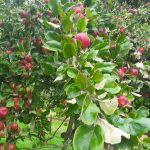 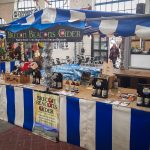 Andrew Jenkins makes cider in the traditional way in an area which, he says, has a great tradition of making cider: “People tend to think of Monmouthshire as the only county in Wales where they make cider, but that is quite untrue. People have been making cider in Breconshire for centuries, and I would like to see a renaissance of that craft.”

Andrew makes just under 7,000 litres of cider every year in Bwlch, six miles from Crickhowell.  All his apples are picked by hand from pesticide-free, vintage quality, apple orchards near Talgarth and Bwlch.

“Vintage variety apples like Dabinett make very good cider,” Andrew said. They are picked by hand, so they are not bashed about. After pressing, the cider apple juice, is put into fermenting vessels.  No water, yeast or sulphites are added; the natural yeasts in the fruit ferment the cider.

“After slow fermentation through the winter, the first cider is ready in the spring.  It is not filtered, and it will clear naturally or remain cloudy.  Nature is in charge.”

Andrew then blends the juices from different varieties: “This is where the magic of cider making comes in, and you create something different and special.  You are not turning out a mass-produced, bland cider which is the same every year.  Artisan cider varies from year to year depending on the harvest and how much of a particular variety of apple you have.”

Andrew’s ciders won prizes at the prestigious International Cider competition in Hereford in 2018.  He sells his cider directly to the public at Crickhowell Market Hall, farmers’ markets and festivals.  Brecon Beacons Cider is also available at the New Inn at Bwlch.

He makes the following varieties: