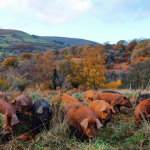 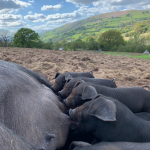 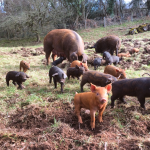 They live outside all the time, 25 per cent of their food is foraged, they are allowed to follow natural pig behaviour, and they are raised five miles from Crickhowell.   They are Forest Coalpit Farm Pigs.

The pigs are reared on a 20-acre farm run by Kyle and Lauren Holford, who moved here from London in 2014.  The pigs are a mix of rare breeds which they call ‘Welsh Black’ and Kyle said: “Our aim was to provide amazing quality meat as naturally as possible, meaning a high welfare great tasting product.”

The farm has 22 sows, who on average have 10 piglets in each litter. “The pigs can behave completely naturally.  They can root and forage for food, and we give them natural fodder as well.  They are allowed to breed naturally without the farrowing pens found in commercial farms.  I think it’s such a win-win situation, it’s better for them, and you get great meat out of it.  Because they’re moving around and getting fat on green leaves, you get a moister product.  One of the breeds in the mix is particularly good for intra-muscular marbling, which means fat runs through the meat and you get a better flavour and meat which is nice and moist.  It’s also much redder, which is one of the things which makes our pork stand out.  It’s such a different product. A pork chop from a supermarket is quite pale with no fat, and it will dry out quite quickly, whereas if you have a pork chop from a proper rare breed pig and it’s on the same level as a steak, only it’s about half the price,” Kyle said.

But keeping them outside all the time means a poorer feed to meat conversion ratio (the rate at which animal feed is converted into meat), which means they are more expensive to raise. “The cheapest way to raise them would definitely be to keep them in a barn and fatten them up,” Kyle said. And the pigs are generally one to two months older than commercially reared pigs when they go to slaughter at five or six months.

And Kyle revealed that they had rejected more commercial methods in the past: “We actually got really good at growing pigs quickly. We got to the point where we could grow pigs almost as fast as the commercial growers, and we got quite excited about the prospect of rearing more and more, but we got the meat back, and we discovered it was not as good; it was much paler and much less flavour because it hadn’t had as much time to run around.  So, we took a step back and ‘woah, we’re going too fast’, which goes entirely against the model of commercial farming nowadays.”

Forest Coalpit Farm is still up and running, despite COVID-19. Gate sales are currently by appointment only. Continue to support your local food businesses!