Langtons Farm’s salad garnishes are picked and delivered ready for serving within hours. 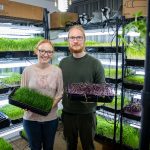 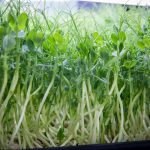 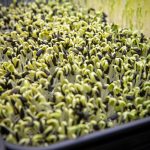 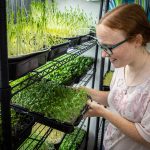 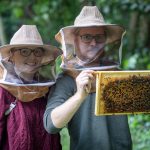 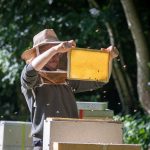 They are incredibly fresh, with an intense, piquant flavour, they sell for the equivalent of £100 a kilo, and you will find them in salad garnishes on dishes served by some of the area’s top restaurants.  They are microgreens, the seedlings of plants like kale, radish, leek and peas, and they are grown under lights by David Langton and his fiancé Katherine Robinson at their home, Langtons Farm, in Gilwern.

“We only started a few months ago, but we are supplying the Gliffaes in Crickhowell, the Hardwick near Abergavenny and The Bell at Skenfrith, as well as Prickly Pear Catering in Llanbedr. “A big reason for our success so far is the Chefs who want to support local business producing good local food,” David said.

So, what is it about their microgreens which are proving so popular with the area’s top chefs? “Our microgreens are harvested hours before they are delivered,” said Katherine, “which means they are really fresh”.

“It is one of the hallmarks of our product,” said David, “we cut them and refrigerate them immediately to take the heat out of them, which retains all the flavour.”

The microgreens are the first stage of plant growth, the seedling, and they are ready in about two weeks.  David, a gardener, explains: “All the plants’ effort goes into putting the nutrients into the seed, so the seedlings are the most nutritious and have the best flavour.”

Their main costs are for the seed, the compostable packaging and their knowledge of growing.  They admit their microgreens are more expensive than some wholesalers but say their produce is hours fresher, something they can achieve by being local to their customers. “Our microgreens are not harvested, packaged, shipped to a distributor, repackaged, stored again then shipped again, it just goes straight out to the chefs,” said Katherine, who has recently graduated with a degree in the Environment and Sustainability. The couple are hoping to move into salad production when they find some land to buy.

David and Katherine are also about to harvest from the 60 beehives they manage in Gilwern.   They intend to sell some in jars, depending on demand (eating local honey is said to guard against hay fever) but most will be sold in barrels. “Next year, are hoping to be harvesting in tonnes,” said David, “which is great because bees are so important to our environment, but they are declining in number. And it’s an excellent product to use instead of cane sugar which is grown abroad and responsible for massive food miles in getting it here. Honey is a great substitute for sugar; try it in your tea it is delicious.”