Reviving the tradition of ‘farmhouse ales’ In the Brecon Beacons. 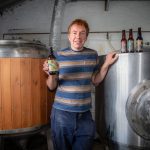 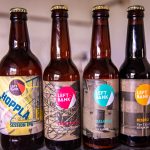 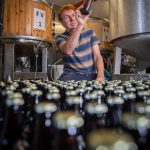 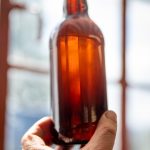 Simon Poffley wants to revive the tradition of farmhouse-brewed beer in the Brecon Beacons.   He opened the Left Bank Brewery in the spring of 2019 and has been brewing since then, using Brecon Beacons water from a borehole.  He wants to start fermenting using naturally occurring wild local yeasts and local malt, barley and hops if he can find them.

The Left Bank Brewery is now the only Craft Brewery in the Brecon Beacons and is located in a farm on the northern edge of Llangorse Lake.  Simon says its farm location is what attracted him: “I want to revive the tradition of ‘Farmhouse Ales’ which were brewed from the farmer’s own supply of grain, hops and yeast as well as water, which is the biggest ingredient of beer.  I have the water, from a borehole on the farm, so it’s Brecon Beacons water, and I want to start using wild yeast from the local area.  It’s a similar process to making sourdough bread or cider, both of which rely upon the yeasts which are all around us.”

But what about the grain, hops and barley? “I would be very interested to hear from any farmers who are growing grains locally. There’s an oatmeal stout which is delicious if anyone is growing oats,” Simon said.

The Left Bank Brewery already brews a Session IPA, French-style Saison, Blonde and Rye Export as well as a Porter Stout. Simon is looking at producing lagers as well.

At the moment, you can buy Left Bank Ales in Bwlch stores and from Left Bank’s website, in bottles or in kegs, though Simon hopes to get his ales into Crickhowell pubs and shops as well.

Simon also runs fermenting courses at the Ty Mawr Walled Garden the other side of the lake.

But are there any benefits to drinking local beers, like there are from eating local honey? “Unrefined beers, which are not pasteurised have all sorts of vitamins which people have been benefitting from for hundreds of years,” Simon said, “as well as the flavour, of course.”