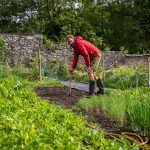 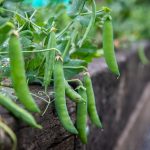 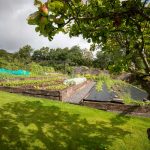 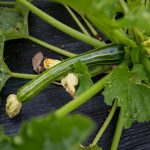 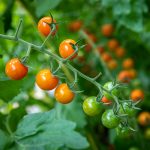 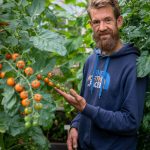 They are grown with “zero chemicals, no pesticides and no fertilisers,” and Ben Ward wants to sell his vegetables within a few miles where they grow in a walled garden in Llanbedr, because it’s better for the environment.

He’s been transforming the 1.5 acres at Moor Park since last spring, into a no-dig, entirely natural garden with row upon row of delicious looking fruit and veg.   Ben plans to sell them to local shops and restaurants and deliver to nearby homes in a local, low carbon, low food miles “veg box” scheme.

So why is he doing it? “Because it’s been impossible to ignore the impact we humans have been having on the environment over the past few years. Living in a rural area all my life, I have witnessed the massive decline in birds, bees and butterflies because of the use of pesticides, and what the increase in carbon emissions is doing to the planet.   So, if I can do my bit and others can do their bit then hopefully we can start to make a difference”, Ben said.

Ben’s father “Mr Ward” was a biology teacher at Crickhowell High School and had a smallholding in Llanelly hill. He passed on a passion for plants to Ben, who later learned about ‘no-dig’ gardening; where compost is laid on top of the soil to suppress weeds and keep the soil moist, eliminating the need for any chemicals whilst protecting the biodiversity in the soil. The result, Ben says, is “beyond organic.”

The veg Ben supplies will be according to what is in season. “It seems wrong to me that you can get a punnet of tomatoes in mid winter for 50p,” he says.

The business now supplies Odonnell Bakehouse in Crickhowell with pea shoots, peas, charlotte potatoes and beetroot for their menu, which is now almost entirely vegan. When he delivers, he also collects their coffee grounds and vegetable peelings to go on his compost heaps.

As a proportion of their ingredients, Odonnell Bakehouse source more food locally than any other business we know; most of the others get their veg from a wholesaler whose produce is grown mainly on large farms in England and abroad.

And there is plenty of potential for Moor Park: “The intention is to sell nearly everything we can grow in the walled garden, and then there is another paddock we can use. The more we can get people growing locally grown veg the better for everyone”, Ben said.

Moor Park Garden is still up and running, despite COVID-19. “Locally produced goods are increasingly more important in light of the current situation.”