Llanbedr family looks to a new future for farming 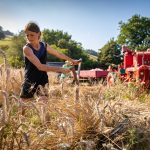 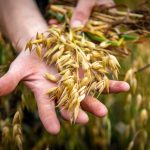 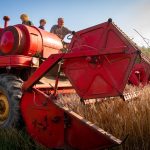 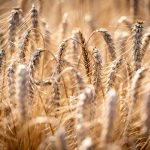 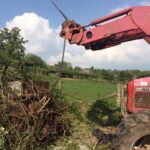 Em Valentin Powell planted her first acre of oats and an acre of heritage wheat last year (2019) intending to turn one into oat milk and the other into flour. This year, she planted 10 acres of heritage wheat and a field of potatoes using a planting machine she extracted from a hedge in the next stage of agricultural evolution.

Work on the oat milk project has continued; she and her business partners have developed a method of producing it without adding artificial enzymes to sweeten it. “It’s a fantastic product with no bought-in chemicals. We now need investment to take our oats and our wheat to the next level,” Em said. The heritage wheat grown last year has been used by the Angel Bakery in Abergavenny. The flour is also sold locally by Natural Weigh in Crickhowell.   Em said: “There is a huge demand for it, and we want a proper, modern, Environmental Health-inspected facility so we can mill all our wheat on-site, fresh to order.”

It’s all so different from what she used to do. As a vet, Em used to care for commercial dairy cows which produced 40 litres a day and had udders weighing up to 50kg.  Now, she wants to try a different way of farming from the modern industry which she says has become: “Compartmentalised, specialised and industrialised; favouring mass production and mono-crops at the expense of mixed farming on a smaller, more local scale, growing crops and animals appropriate to local soil types and meeting local demand for produce.”

So, the diversification of the farm continues. Em’s husband, Keith is one of the prime movers behind the Stump Up For Trees initiative; hoping to plant a million trees across the Brecon Beacons National Park. Now the couple wants to mix trees, livestock, arable and eventually, market gardening on their farm.

Em said: “Sheep farming forms the backbone of our local farming community however reduced demand in the UK for lamb and increasing pressure to protect biodiversity requires us to look for alternative ways to make a living as farmers. Financial income is obviously a primary factor however in the current social climate I think farmers have an essential role to play in improving the health of our population by improving the health of our soils and fellow species. We just want to experiment, diversify and see what we can grow at The Bettws; after all, they used to grow everything here, and we want to see what is possible in future,” Em said.