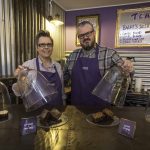 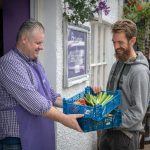 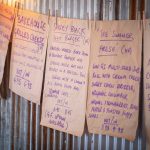 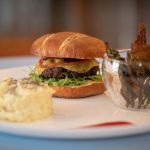 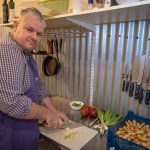 They source more of their ingredients closer to Crickhowell than anyone we know.  Most of their fruit and veg is grown 2 miles up the road, their eggs are laid just across the valley and just about everything else is bought from neighbouring shops.  They are Odonnell Bakehouse.

Darryl and Michelle moved into the Corn Exchange in December 2017 to sell “Food for Foodies” starting with fine coffee and their famous brownies.   Since then, they have developed a mostly vegan gourmet menu using the finest ingredients, mostly organic and local wherever possible.

The beetroot in their burger, potatoes for the salad, savoy cabbage for the Green Thai Soup, organic cucumber and strawberries for their multi-seed sub roll, even the tomatoes for their ketchup all come from Moor Park in Llanbedr, where Ben Ward grows completely pesticide and herbicide free produce in a 1.5 acre walled garden.

They are chosen by Darryl for their freshness and the flavour which, he says is “chalk and cheese” with anything you can buy elsewhere.  “The difference comes when you are trying to create a flavour for a particular dish. If you are using intensively farmed produce then you have to work much harder to find that flavour.  Whereas with fresh organic produce delivered from just up the road, the flavour is already there and what you do with it is much more delicate.”

“We pride ourselves in producing food for foodies, people who know what food should taste like and our customers look for organic local ingredients. Our target market are very much interested in that,” Darryl said.

But does buying local organic produce and changing their menu throughout the year make life more difficult for the Chef? “It does make it more challenging because you are having to invent recipes with what is in season.  But that’s part of the excitement, you can run with it and see what works and what doesn’t.  You’ll never get the same flavours from one season to the next but that’s what makes it enjoyable and exciting and keeps you on your toes.”

But the couple’s relationship with Moor Park does not end there.  When Ben Ward Ben delivers their produce, he collects their fruit and veg peelings and coffee grounds to add to his compost heaps which, in turn feed his crops.

“We are all aware of what’s happening in the environment and anything we can do to help the planet by buying local, reusing and recycling the better.  And reusing our waste for compost means better produce for us in the end, so it’s a no brainer.”

Anything Darryl and Michelle can’t get from Moor Park, they buy from neighbours.   The eggs for their ‘Posh Egg Sandwiches’ come from Richard Lewis’s farm across the valley.  The most obvious exceptions to this rule being Pembrokeshire Laverbread, dates and avocado, though if Daryl could find those locally, he would!