Martha moved back to Wales in search of a better life and found it. 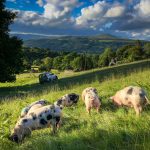 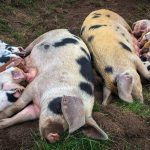 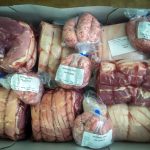 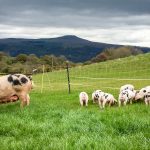 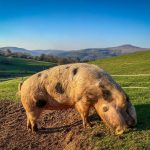 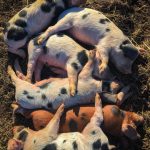 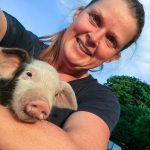 In 2013, Martha Roberts followed childhood memories back to Wales in search of ‘The Good Life’; she ended up with a herd of 85 rare-breed pigs in Govilon, and a successful online trade in free-range pork.

“My earliest memories were of happy days on my grandparents’ farm here.  I had reached a crossroads in my life and was moving out of a relationship and a house in the Cotswolds and the only place I really felt connected to was here.  So, I decided to start a smallholding, grow some veg and fruit, have some chickens and maybe a few pigs for the freezer,” Martha said.

She started with three pigs, but her herd grew.  She started tweeting about it and people began to ask where they could buy her pork?  So, she started her enterprise, The Decent Company, selling meat boxes online.

“The majority of my business comes via social media, predominantly Twitter.  I didn’t mean it to be that way but there is a huge interest in food and sustainable food sourcing out there.  People like interacting with the producer and asking questions, they feel like they get to know you and that gives them confidence to buy from you,” Martha said.  “The advantage for me of selling direct rather than through a wholesaler, is a short supply chain; the customer is paying me, not anonymous people in the middle.”

The Decent Company does supply some restaurants, including the one at the British Academy of Film and Television Awards in London, and a couple of wholesalers who also do meat boxes.  But most of her sales are by direct mail order.

So, who buys Martha’s pork? “There is a misnomer that the only people who buy in boxes from small suppliers are middle class, but that is not my experience at all.  I deliberately have a range of boxes so that people on a variety of incomes, who care where their food comes from can buy from me.”

Martha’s pigs are slaughtered at Raglan a few miles away and butchered and packed at a processor in Symonds Yat, where her pigs “fill in gaps” in an established production chain, with all the necessary animal welfare and food hygiene qualifications.  “I process the orders and make sure the right pork gets in the right boxes, get it to the courier or deliver it locally,” Martha says,  “There is additional effort there (compared to selling through a wholesaler) but there is connection with customers and additional margin there as well.”

So, did Martha achieve ‘The Good Life’ when she moved to the country? “It is the Good Life if you are prepared to put in the hours and work incredibly hard.  If your plan is to achieve world domination and live a life of riches, I would rein that thought in massively.”

“But it is not all about money. I wanted to produce something which was real and felt invested in massively.  It is the thing I am most proud of. I challenged myself and learned new skills in the middle of my life which is always a good thing to do. And the pigs themselves are an incredibly interesting, sociable intelligent animal, particularly the Gloucester Old Spot which are a rare breed and are great characters.”

The Decent Company is still up and running, despite COVID-19. Continue to support your local food businesses!