Trealy Farm’s business model adds value up and down the food chain. 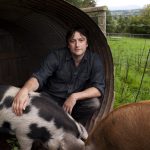 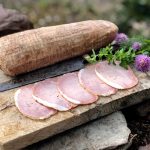 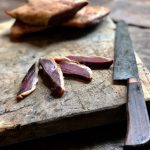 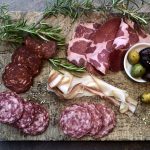 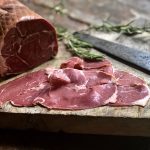 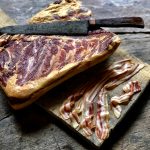 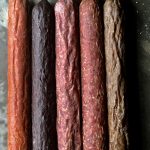 When James Swift started making charcuterie, rare breed pigs were selling for £20 or £30 each, even though the cost to rear them was over £200. The bottom had fallen out of the pig market, and many free-range farmers were going to the wall. He decided to do something about it.

James said: “There were a lot of small farmers raising pigs in a very traditional way, often rare-breed, often two or three pigs. They might slaughter one for their table and send the others to market, but they couldn’t get a decent price for their pigs because they weren’t exactly what the supermarkets wanted.  The farmers were going out of pig farming in large numbers. At the same time, I wanted a regular supply of free range, older, larger pigs because they give a better flavour for charcuterie.  So, I spoke to the farmers and said that if they adhered to certain welfare standards, particularly that the pigs must be free-range, then I would buy them at a better price than they could get at market.  It’s like a fair-trade system – we never call it that but that’s what it is like.”

By imposing their own welfare standards on the farmers, Trealy is able to ensure it only gets value-added free-range pork.  They add further value to the meat by turning it in to charcuterie and in turn they pass some of that value back to the farmer in the form of higher pork prices.

The result is a buyers’ group of more than 200 farms, some of them in the Brecon Beacons and Monmouthshire, who supply Trealy Farm with pigs.  Their biggest and most regular supplier is Maurice Trumper, 12 miles from Crickhowell.  All the providers are checked by Trealy’s own in-house expert to ensure standards are maintained.

“It’s the sort of system which has largely been destroyed in the UK,” James says, “because the supermarkets wouldn’t let that sort of range of diversity happen anymore.  They make everything the same; you get the same price, whether you carefully raise the free range, Saddleback pigs for two years, or whether you’ve factory farmed and soya fed a hybrid pig, there is no incentive to do anything better.”

You can eat Trealy Farm Charcuterie at The Dragon in Crickhowell or if you have your event catered by Prickly Pear Catering. You can also buy a hamper when you stay at the Glanusk Estate. Or you can visit Trealy Farm in Goytre or order from their website.