Welsh Venison Centre is farm, butcher, restaurant supplier, and shop all in one!

Farmer Andrew Morgan used to farm intensively but says the local market is the best. 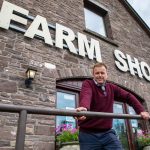 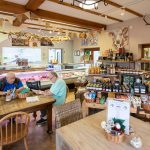 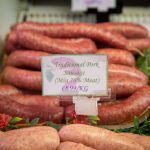 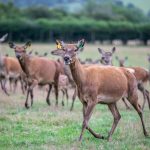 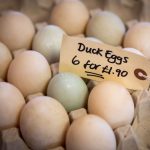 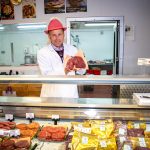 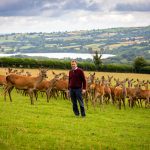 Andrew Morgan used to farm intensively for supermarkets but gave it up to grow naturally and sell to people in around Crickhowell instead: “We tried piling it high and selling cheaply, but we discovered that it was much more satisfying to produce better quality and sell it locally,” he said.

Andrew and Elaine Morgan used to farm 280 acres of potatoes and 1,800 breeding ewes in using the most up-to-date commercial farming methods in and around Bwlch, but nearly went under when their potato crop failed.  So, they decided to do something different, moved to more natural farming methods and opened up the Welsh Venison Centre and Beacons Farm Shop and Café.

Now their lamb, beef and venison appears regularly on the menus of The Hardwick Restaurant at Abergavenny, The Bear in Crickhowell and the Gliffaes Country House Hotel nearby.  Visitors to the farm’s shop and café can stop for a coffee or meal and then buy fresh meat, including venison, which is butchered on the premises.  They can also choose from a selection of Welsh and local goods.

“We stopped farming intensively, reduced our stock levels and our costs went down as well,” Andrew said.  But why the deer? “My brother and I had been to New Zealand in the 80’s and there is a massive amount of deer farming there.  No-one else was doing it so we decided to give it a go.  Now, we have become something of a destination for shoppers.  We get visitors coming in to see the deer and they stop and buy local meat which is raised a few fields away, they like that.”

Andrew and Elaine are making the most of the enthusiasm for locally-produced foods by stocking a range of locally produced goods, including Apple Juice from Talybont, cheeses from Blaenavon, Biscuits from Brecon and more.

But Andrew acknowledges that the competition from supermarkets is fierce: “Food is undervalued in this country, too many people want it to be cheap above all else.   We have to be competitive with the supermarkets but at the same time we need to tell people that we are offering something better – food which is reared naturally and not fed intensively, with the best welfare standards to give the very best flavour.”

The Welsh Venison Centre shop and delivery service are still up and running, despite COVID-19. Continue to support your local food businesses!