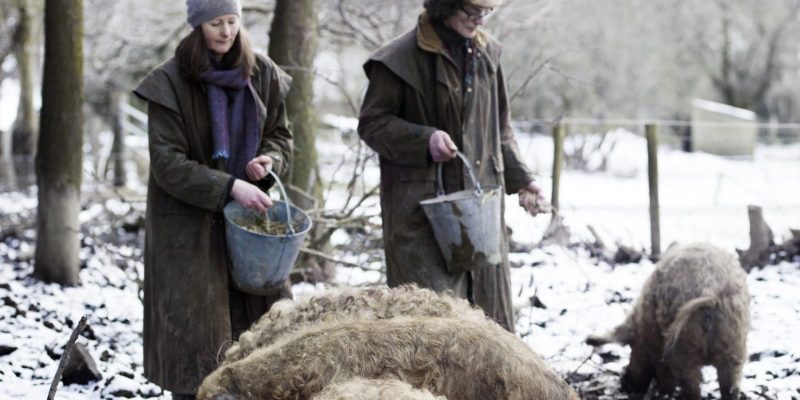 It’s a crisp autumnal day and Stuart Mason is busy shifting pig arcs on his back into the next field, as shelter for his growing herd of Mangalitza pigs. “We farm traditionally,” says Stuart, “We don’t use tractors or quad bikes and our methods are more akin to how Mangalitza would be raised in their homelands.”

Stuart and his wife Angela rear rare-breed pigs on their west Wales farm. Trading as Welsh Mangalitza, they are the only UK breeders with an on-site butchery. So sought after is their niche product that they command a London-based broker to handle wholesale, “They found us,” says Stuart.

Welsh Mangalitza secure value in pork through high welfare standards and an innovative approach to butchery.

“We knew that if we were going to do this, it had to be done with a purity unseen in pork production, an ethos we have maintained to this day. We call it Impeccable Provenance,” says Stuart. “Our pigs are outdoors 24/7, they receive no antibiotics, tail docking or teeth clipping. They forage for their feed of hand mixed grains you and I would recognise.”

Stuart practices ‘Nose to Tail’ butchery and says, “We produce not to be trendy, but to show ultimate respect to the animal we have taken. All our produce is pure in formulation. We don’t use rusk or fillers, sulphites or quick fix Butcher’s powders. We grind all our spices from whole and our baked goods are cooked in a wood fired range with wood sourced from our own land.” Every dot of the animal is used, right down to teeth and skull which are sold to a taxidermy artist.

“The biggest success is our fresh blood black pudding,” says Stuart, “We are one of the very few producers in the UK using fresh blood and the only one producing Mangalitza black pudding. The majority of UK black pudding is made from imported dried blood sourced from pigs kept in abysmal conditions.”

“To be local, you have to invest in local,” says Stuart, “We use local ingredients in our own produce and source feed, forage and bedding locally, some as close as three miles away.”

The couple moved to their Welsh farm in 2010 to run a guest house. Given three pigs for his birthday, Stuart says, “You could say it was a hobby that got out of control.” Recalling their arrival, Stuart says, “News soon spread and we had droves of cars driving by our paddocks to catch a glimpse of the sheep that were actually pigs!”

Wholesale and local market trade make up their business. “Wholesale is our investment money,” says Stuart, “But we are not elitist and our market customers are just as important to us as the London restaurants.”

The Mangalitza high fat to meat ratio provides a challenge, “Bringing a relatively unknown species to market in a world that is anti-fat is not the easiest,” says Stuart, “People often think that pigs mean just bacon and sausages but it’s about education and we’ve made a go of it.”

Advising against scaling up, Stuart says, “Small producers often dilute their products to conform to big business. They lose what they’ve built from the heart. Bigger concerns can lack integrity and use an artisan guise solely as a marketing strategy. Be true to your passion and stick with it. The food world is changing and people are becoming more educated around sourcing.”