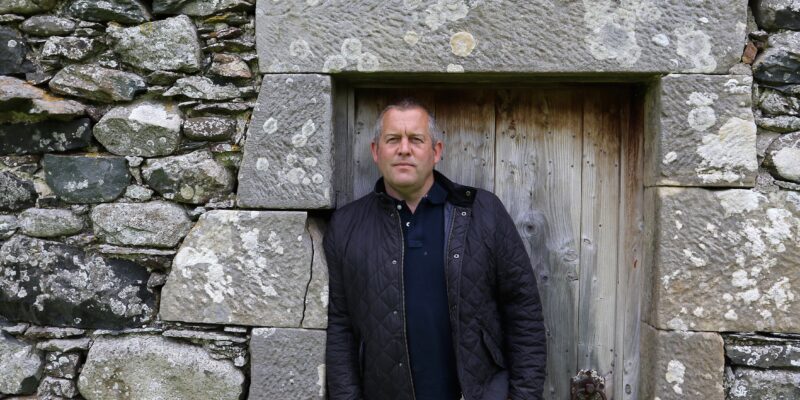 James Rebanks, aka ‘The Cumbrian Shepherd’, has farming in his blood. The Rebanks family have owned the land around Racy Ghyll Farm in the Lakeland Valley of Matterdale for more than six-hundred years. But it has not always been farmed as it is today: regeneratively, with care taken to protect wildlife and rebuild ecosystems damaged by the intensive methods used in the past. James has made a name for himself as a writer and a promoter of the sustainable agriculture approaches that have revived his land.

The farm’s 185 acres are occupied by a herd of Belted Galloway Cattle, two pigs, and 450 hardy Herdwick Sheep. This traditional breed, thought to be a mix of native British and Viking sheep, is tough enough to withstand the brutal winters on the high fells of Cumbria. His flock is ‘hefted’ to his part of the mountain through some innate knowledge passed down from ewe-to-lamb for generations.

Despite James’s affectionate claim that his family of farmers have been and remain ‘nobodies’, he has gained great popularity as a writer. His first book, ‘The Shepherd’s Life’ made it into the bestsellers list and launched the Rebanks name into the literary and farming spotlights. Four years later, ‘English Pastoral’ was published. An account of how British farming has changed through James’ lifetime, it draws on his own experiences of farming with his father and grandfather, and the big changes he has made to protect his farm and his homeland.

Beginning with his grandfather, James tells the story of how a traditional, mixed rotational farm had to fight to keep up with plummeting food prices and increased technology by embracing intensive agriculture after the Second World War. By the late nineties, his farm had been stripped back to mainly grass for grazing and making silage. James says they had no choice but to follow the trend and the science: “We just didn’t know enough to say no or to argue against it, and I’m not sure we could have done anyway because we were trying to make a living.”

One farmer in the village, however, was resistant to change. ‘Old Henry’ kept his farm mixed, as James’ grandfathers had been, and shirked the use of pesticides and chemical fertilisers. When Henry passed, nutrient and health tests were performed on his soil and that of neighbouring farms. The results stunned James and his father: Old Henry’s soil was the richest in the district, by a lot. This triggered a change in thought for the next generations of Rebanks. They realised that they couldn’t keep going as they were, with their soils declining and wildlife such as Curlews disappearing from their land.

“As we learn more about the sixth mass extinction, as we learn more about climate change, it’s becoming really clear that what people like my family do on the land matters. My family on their own don’t destroy the world or make it less biodiverse, but in combination with thousands or millions of other farmers around the world, we can have these profound impacts.”

Since James has taken charge of the farm, he’s worked hard to improve the health of this ecosystem. On the advice of a conservationist, Lucy Butler, James has altered the waterways and ponds running through his land to improve water flow and reduce flooding. He has planted around 15,000 trees across his land and separated it into 45 different fields, lined with hedgerows. By increasing the biodiversity of the plants on his land, James hopes to improve the health and productivity of both the soil and the grazing sheep.

James’ popularity as a writer has given him a platform to spread his sustainable agriculture message and lend a hand to conservation groups. He was recently involved with the Countryside Restoration Trust in a bid to purchase a traditional Lakeland farm, to restore it and the surrounding landscape to its former glory. Though the group was out-bid, James continues to use his platform to speak up for change.

“Farming, food, environment, diet, health – all of these things are actually the same thing in many ways – they sort of revolve around having healthy ecosystems, producing healthy food, that’s produced in as natural a way as we can manage. If we want to eat high-quality food and live healthy lives, then reconnecting with the land through our food and our shopping and our cooking is vital.”

He speaks with passion about how farmers are villainised for the loss of biodiversity and soil health in the British countryside.

James quotes DEFRA figures which show that we spend as little as 10% of our household income on food, compared to the 30-40% figure of 50 years ago. Our expectation of cheap food has meant farmers rely heavily on government subsidies to prop up as much as 50% of their income. He believes we need to think more holistically about food production, which involves becoming more connected to the people who produce our food, and the landscapes in which they do it.

“It’s not just about there being food on the table – I actually think by producing local food and having local food markets, there’s more engagement between consumer and farmers and there’s more seeing of what’s happening and understanding of it.”

And for those who may see the idea of converting to regenerative agriculture as daunting, James promotes flexibility between the ‘black-and-white’ issue of sustainable farming vs intensive.

“I think it’s a mistake to think of this as you’re either farming like hell or you’re a hippy lunatic. We can do both – and that’s the great hope for British farming – we can do both, and lots of farmers want to.”

“The case has to be made for why people like us are of any value to people like you, really. And I think the way I can answer that is, in my farming and my writing, is by saying “Don’t give up on us, help us and we’ll deliver all those things you want.”

Image Credit: Andrew Heading. Copy by Imogen Astley Jones and As You See It Media.

Categories: Success stories.
This site uses cookies from third-parties to add functionality and help us to improve your experience. By using this site you consent to our use of Cookies.