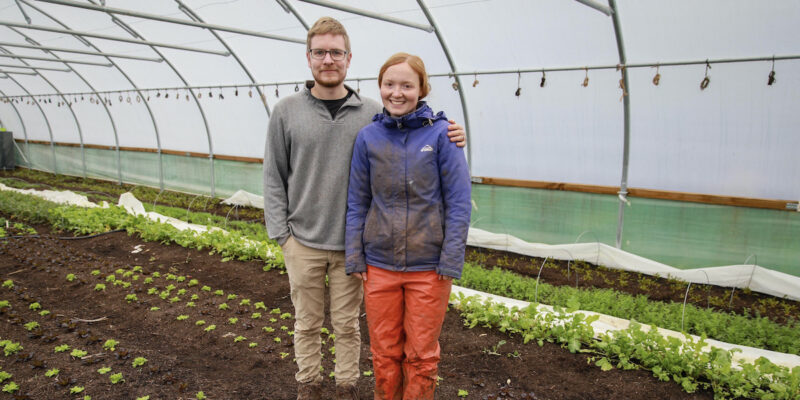 Newlywed couple look back on their new venture with pride

Nearly a year after starting their organic, regenerative livestock and market garden, David and Katherine Langton don’t regret their decision, but are they making any money?

“We’re probably not comfortable, financially, yet. Cashflow is really tight in the first few months while we are growing so fast” David says. The couple acknowledge that, as with all new businesses, the first 2-3 years are all about investing time, money and effort. But Katherine is upbeat: “It’s been hard work, yes. It seems like we don’t achieve a lot every day, but when you look back at photos from March last year, there was nothing but grass in this field. Really, it’s incredible how much we have achieved.”

Katherine and David are now the proud owners of a mixed, organic market garden just outside Crickhowell in the Brecon Beacons. The couple began renting land for Langtons Farm from a local organic farmer in March 2020, and since then, they have transformed their 3.5-acre plot.

It’s now an ever-expanding market garden which produces vegetables, meat from chickens, four Tamworth pigs, and 180 eggs a day. They operate a ‘no-dig’ farming system, where they kill off grass and weeds on the pasture before piling compost on top and planting seeds in raised beds in the field and in two polytunnels. The land is rotated, and livestock is moved around to till and fertilise the soil naturally. 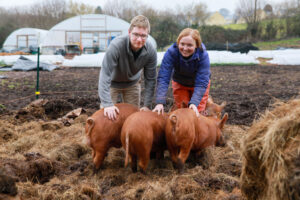 The Langtons first advertised their organic, locally grown vegetable boxes on Facebook in July 2020, and sold 30 boxes in the first week. They do very little advertising but have still doubled their production and expect to double it again by summer 2021, while still supplying vegetables throughout the winter.

“A lot of other market gardens run from June to December and then they’ll stop over winter,” David says, “We thought it was best that people were able to get organic vegetables from one place all year round.”

The couple supplements any veg they can’t grow themselves with produce sourced from other local farms – insisting on only organic and UK-grown. David says: “We do the best we can to source as locally as we can. The furthest we go is still much more local than you’d get in a supermarket.”

The couple also collaborates in other ways with local market gardeners like Jonny and Alice of Orchard Acre. They increase their buying power and keep costs down by bulk-ordering agricultural equipment and farm supplies between them. This has been especially important with supplies of seeds being affected by Covid-19 lockdowns and Brexit.

The Langtons missed the planting window for some vegetables in spring last year, but this year hope to replace bought-in veg with their own. “This is our first year, so we can’t do everything. The things that we’re buying in now, we’ll start to grow ourselves as soon as we’ve got the ability to,” David says, “As we come into spring, 95% of the veg we sell is going to be ours again.”

But how are they managing financially? Katherine says: “Lots of the money that comes in from the farm we put back into the farm, so we’re expanding quite quickly. With the vegetables, the egg chickens, the meat chickens and the pigs – every time you add another thing on it costs more money, and it takes a while to get that money back.”

That’s particularly true with raising livestock as it has a longer lead time before seeing any profit. David estimates that their pigs won’t be ready for slaughter until Spring 2022. The meat chickens are beginning to pick up; they sold their first batch at Christmas and are planning on a fortnightly batch from now on. The egg-laying hens are finally breaking even, despite having started laying later than anticipated. David says, “For the two months that we expected them to be laying but they weren’t, we still had to feed them. Eggs have been our hardest expense.” 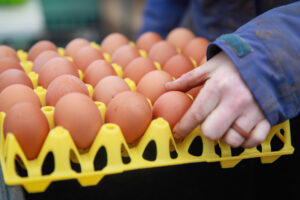 So, why take the more challenging route of mixed farming? The couple is looking long-term: “The combination of meat and eggs will be equal if not bigger than the vegetables,” says David, “and it allows us to be flexible to changes in local demand.”

Their advice for others starting out is to be aware of the challenges and costs: “Financially, you need to be producing 30-50 veg boxes every week to live comfortably – if your costs are very low. If you’re expanding, then people should know that cashflow is a real issue at the beginning. We’re doing a lot – we want to have a mixed farm and be doing everything, but to try and do that in the first year is a lot to manage financially,” David says.

David encourages prospective market gardeners not to be dissuaded by the cost of renting land, as it only makes up a small proportion of the total start-up costs for a business which operates on just one or two acres. “You’re looking at £20-30,000 start-up costs in total,” he says.

Despite the challenges of Covid-19 lockdowns and starting out, the Langtons have had great success in their first year of farming: “If anything, Coronavirus has driven a higher demand for our vegetables and door-to-door delivery,” David says. “I’m proud of what we’ve achieved. It’s been a hard year, but we’ve done a lot,” says Katherine, “We’re resilient.”

Find out more about Langtons farm on their Facebook page: www.facebook.com/LangtonsFarmCymru

Pictures and words by As You See It Media and Imogen Astley Jones.

Categories: Getting started.
This site uses cookies from third-parties to add functionality and help us to improve your experience. By using this site you consent to our use of Cookies.