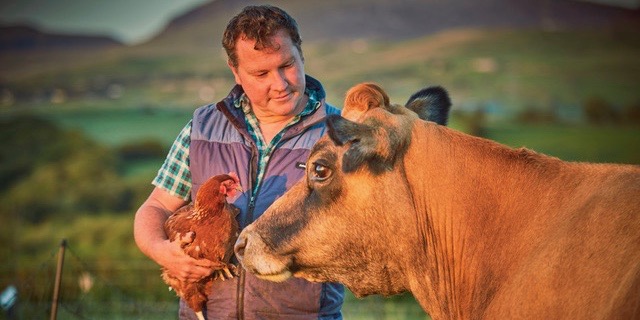 “There is a common and incorrect assumption that food production has to be an environmentally negative thing. However, regenerative agriculture and taking a holistic and permaculture approach can result in food production systems which actively help with our current ecological and other problems.”

So says Matt Swarbrick, co-owner of Henbant Farm near Caernarfon, North Wales. Matt and his partner, Jenny, bought the derelict farm back in 2012. With no prior farming experience – Matt was a documentary film-maker with a background in ecology, while Jenny worked as a hydrologist for the Environment Agency – they have transformed Henbant into a thriving example of how a permaculture approach to regenerative agriculture can succeed. They are proving that farmers can grow fresh, healthy produce, ensure a good income for themselves while improving and enhancing their farm ecosystem, build their local community and enjoy it, too.

“Farming is the most important job in the world, it’s the main way most of us interact with our environment: we all eat. It’s also interesting that it’s often one of the poorest paid jobs in the world. It’s one of the jobs with the highest suicide rate, and yet it should be a job that we’re all so proud or lucky or honoured to do, it’s such a real and beautiful job,” Matt says.

“One of the most destructive things currently is cultivation. We wanted to produce food without losing soil. We wanted to be able to create an ecologically rich, soil-building space where we can produce vegetables and feed our local community,” Matt said.

Matt and Jenny recently set up their no-dig market garden to grow vegetables, consisting of a wide variety of species interspersed by rows of trees, which enhance their productivity by blocking wind and attracting pollinators to the site. They also keep native sheep breeds, producing lamb, mutton and wool; pastured chickens for eggs; and cattle for beef and milk. Not only do their livestock provide nutrient dense food, but they also graze in a way that builds soil and sequesters carbon. The pigs act as waste recyclers and “living tractors” that are a key part of our woodland management in a way that that conventional tools and machines couldn’t do.

Although the farm covers 80 acres, three-quarters of this land is occupied by woodland and rough grazing, and Matt admits that less than half the land is ‘productive’ in the conventional farming sense. However, he places great value in having trees on farms which he says: “Break up your pasture and offer shelter, shade, increased moisture retention and carbon sequestration. Having the paddocks that are formed with the agroforestry greatly improves our grazing and the tree crops can be worth more than that from the livestock.”

Matt is averaging out the tree cover on his farm across the site by planting tree lanes on grazing pasture. He is hoping that the short-term loss of growing and grazing space, combined with the increased workload of working around the trees, will be outweighed by the long-term benefits of increased biodiversity, richer soils, and greater water retention. He argues that these benefits increase the resilience of his farm – a quality which conventional farms lack, and which, in Matt’s opinion, makes them increasingly vulnerable. “You only need so many drought years, or feed price increases, you only need so many different problems to low diversity, high input farming systems for them to start falling apart,” Matt says.

Most British farmers rely on subsidies to support much of their income. However, many fear that this vital support will be withdrawn as we move out of the European Union. Matt believes that without the current system of subsidies, most British farms will suffer – unless they turn to alternative practices which involve working with nature: “I think the more you chip away at that system [subsidies], the more you’ve got to work with nature, the more you’ve got to come back and go actually look we need to diversify, we need to do something cleverer.”

Although Henbant does receive a small amount of subsidy, he is confident that they could still do what they were doing without the extra help: “The problem is that all that conventional food is so propped up by external costs. If you look ten years down the road, then those costs have got to start being internalised back into that food production system. Therefore I think it’s just good to be ahead of that game. The ultimate thing is that there’s no other choice is there? You can question whether the system of farming I’m proposing can feed the world, but can the current system of farming feed the world? Well, to be honest, it’s got no chance. We’ve got no choice but to do things differently.”

Matt estimates that they make around £22,000 per year from produce sales, vegetables, pastured eggs and 100% pasture fed beef and sheep. The campsite and ‘glamping’ they offer on-site props up the rest of their income. “Really our farm is subsidised by tourism.” However, Matt says the extra income offered by tourism offers more than just financial stability: “I think everybody needs to hear a dawn chorus once every couple of years, you know? The more people you can get out into the countryside and just hear that, slow down and think about what really matters. The better we will all be”

For Matt, his way of farming is all about adding diversity and layers of enterprise to the system. Although he acknowledges this can be more labour intensive compared to conventional intensive farming methods, he sees this as an opportunity to provide employment and increase wellbeing.

“There are so many wins aren’t there – I think there are so many wins by diversifying what your farm does and adding on those layers of production, creating a functional food producing ecosystem – and they’re just as ‘addable’ on big farms as they are on small farms. But you would have to start employing other people or create another space for people to come onto the farm…You could give people much more purposeful employment which sorts out half those mental health issues, all sorts of things really, by bringing people back into food production.”

So, Matt’s message to others who might want to ‘get ahead of the game’?

“Building a context of why you’re doing what you’re doing is the first step I would encourage farmers to think about the why… asking farmers to step back and look at their farm as an ecosystem or just look at it with wide-open eyes about what their farm could actually do.”

“Would I recommend setting up a no-dig market garden on your farm? Yeah – you’ve got to want to do it – it’s a lot of work, and it’s a big learning curve. But the best thing is every Thursday morning you go out, and you pick a quantity of beautiful regenerative food, and that’s going out to all our neighbours, and that feeling is just magical.”

You can find out more about Matt and Jenny’s farming methods at https://www.henbant.org.