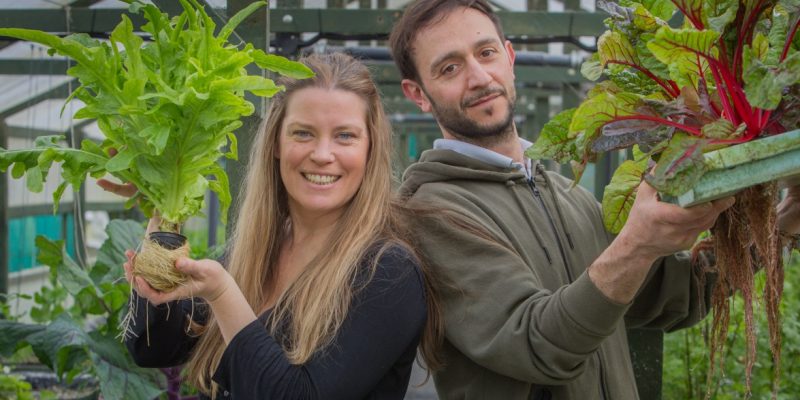 Co-founder of Bioaqua, Antonio Paladino certainly thinks so. Home to the UK’s largest aquaponic trout farm, Paladino runs his venture with partner, Amanda Heron from their farm near Frome in Somerset. Heralded as the future of sustainable farming, Bioaqua has been referred to by industry experts as ‘the best aquaponics system in the UK by a mile.’

Following a trip to Borneo where he literally ‘bumped into’ aquaponics, Paladino has spent the past ten years developing a system to grow crops which combines organic fish farming, hydroponic irrigation and, in the words of Paladino, “The natural methods of Mother Nature.” Trout are stocked in small numbers and fed with organic feed. Antibiotics, pesticides and herbicides are not used.

Criticised by some as a system for warmer climes, aquaponics can be costly to run in cooler parts of the globe. With limited sunlight, farms rely heavily on artificial light instead. Solar panels are often unreliable and energy bills run high.

Not so for Paladino, thanks to his low-tech approach, “We only use electricity for irrigation and to pump oxygenated water around the tanks. We use 3kw of electricity per hour for every 1000m2, about as much as it takes to boil a kettle.” Paladino continues, “The big news,” he says with a grin, “Is that we grow seasonal crops in sunshine and soil.”

Polytunnels are used with no need for artificial lighting. Irrigation is the only hydroponic element used. Passed through bio filters from fish tanks, water is distributed via a closed system to sustain crops. “We grow twice as many plants in half the space because the water is packed with nutrients from fish waste,” explains Paladino. The system takes just 5% of water resources used by traditional farming methods.

A chef by training, Paladino grew up in Northern Italy. “I’ve always been interested in environmental issues,” says Paladino, “I wanted to do something to make a difference.”

Keen to share his knowledge, Paladino runs regular courses. “One man and his farm are not enough,” he says, “Working together we can make change. Our courses provide only small revenue but are the cherry on the cake.”

Fish and vegetables provide the main income. Paladino also sells marinades made with farm produce to accompany the trout. “We trade through an online food-hub, at local farmers’ markets and festivals. We offer private catering too,” says Paladino.

Paladino advises, “Now is the time to invest. Post-Brexit, things will be tough for UK food production. Set your purpose, do your research and take experienced advice.” Reflecting on his ambitions, Paladino says, “I won’t stop until a sustainable way of producing food is established globally.”

Find out more and learn about training opportunities at: www.bioaquafarm.co.uk.