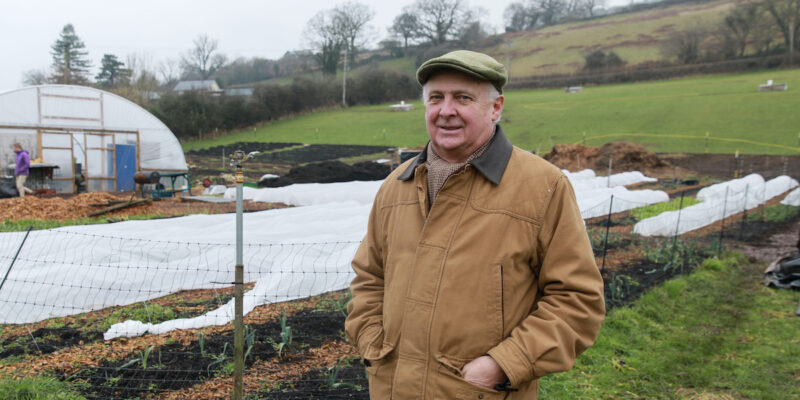 Collaboration is needed to encourage more young people into farming

John Morris is a successful organic beef farmer, who also supplies Welsh Farmhouse Apple Juice to the Prince of Wales. So why is he renting 3.5 acres of prime pastureland near Crickhowell to a young couple starting out in mixed livestock and market gardening?

“The problem with farming in Wales and across the UK is that the average age of traditional farmers is over 60,” John says, “So, farmers should be encouraging young people into farming – and not necessarily just their sons and daughters. We need to bring in new blood.”

And that’s just what John did, when he invited David and Katherine Langton to start up Langtons Farm in March 2020. In less than a year they introduced pigs, laying hens, chickens for meat and rows of no-dig vegetables to their regenerative market garden. “I’ve always been keen on local food,” John says – his apple juice business, since passed on to his son, has always sourced their apples within a few miles of the farm.

John says what’s different about him from other traditional landowners is that he’s renting out so little land: “It is a bit of a leap of faith for a traditional landowner, particularly as it’s renting only a small part of your farm. It’s more normal to rent larger plots or even the whole farm on a commercial basis for pasture, for instance.”

John receives an annual rent for the field, which allows him to free up some time as he moves into retirement and still earn from his land. “I’ve always believed that farming has to profitable, and for me as a farmer I have to get an income from it,” says John, “I’m at an age where I’m still farming but I’m cutting back, and this was a way of releasing some land to let somebody else have a go without losing out financially.” 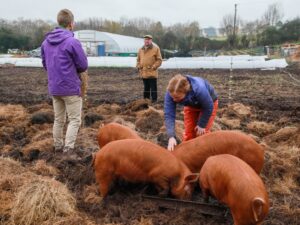 John encourages other landowners to not be dissuaded by farming methods which alter the fields. “The structure of the field has changed because there’s polytunnels up, fencing up, there are pigs and all other things as well, so if you wanted to revert back (to pasture), there is a change that has to happen again. I think that’s what some farmers might find a bit difficult, but I don’t think it’s a big deal personally.”

The Langton’s operate a ‘no-dig’ cultivation method which preserves the soil structure and adds quality to it. John says that if they moved on, it wouldn’t be difficult to revert the field to grazing pasture.

John not only receives an income from the land but collaborates with the Langtons in their veg box scheme – now their customers can get a bottle of his apple juice with their vegetables courtesy of John’s orchard. The Langtons receive organic-certified land to grow on and any help they need from big machinery, which they don’t have and John is happy to offer – in exchange for half a dozen eggs now and then.

John’s advice for landowners venturing into collaborations like this is to make sure they believe in the project, and to pick the right tenant. “You have to have the right client as well and I’ve been very lucky here – David and Katherine are dedicated to this.” John says.

“I’m really impressed by what’s going on here and I think it’s a template for other farms in other areas. Particularly with Brexit and now unfortunately with Covid, the way we grow and distribute farm produce has to become more local. I’ve always been a great believer in diversification on farms.”

Pictures and words by As You See It Media and Imogen Astley Jones.

Categories: Getting started.
This site uses cookies from third-parties to add functionality and help us to improve your experience. By using this site you consent to our use of Cookies.