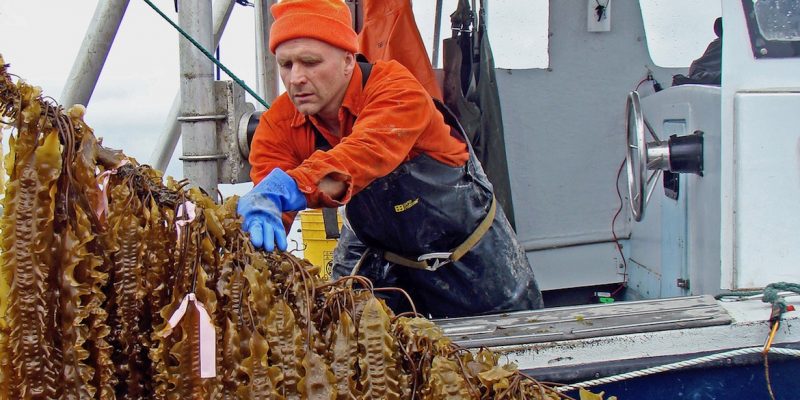 A new model shows how to grow seaweed and shellfish without breaking the bank or the environment.

How does a small farmer supply a nutritious crop with no chemical fertilizers, no water inputs, modest capital costs, and little maintenance while making a good living? Bren Smith knows the answer: grow seaweed.

The co-founder and executive director of Greenwave, a U.S.-based non-profit that promotes ocean farming, made an eye-popping $140-$150,000 a year in profit from his own farm off the coast of Connecticut for about a decade before deciding to devote himself to advocating for a form of farming that he sees as fulfilling a range of pressing environmental and social needs.

Bren’s model creates a vertical farm in 20 acres of ocean where he grows kelp on a network of ropes strung between buoys, and shellfish such as clams, oysters and mussels in baskets on the sea floor or suspended from other ropes.

He says it costs only around $20,000 to start a farm, covering a boat, ropes, cages, anchors, seed, and the typically low cost of leasing an area of ocean from the local authority. In return, it produces crops that are both marketable and sustainable.

The model is immune from problems like drought, land scarcity, and rising prices for water and fertilizer that are already squeezing conventional land-based farmers, and will only get worse in coming decades, Bren says.

“Whether it’s the economic cost or the environmental conditions, we are going to have to search for other affordable, localized, replicable, scalable systems to feed the planet because our agricultural system is going to be radically reorganized by the climate economy,” says Bren, 45, a high school dropout and former commercial fisherman.

There are now 20 ocean farmers following the Greenwave model at different stages of development in the U.S. Bren is also looking for opportunities overseas, including in Britain, where his plans are more advanced than anywhere else outside America.

The new entrants include commercial fishermen who want to diversify their businesses; land-based farmers who want to try something new, and increasingly, young people who want to make a living growing food but are deterred by the high cost of entry to conventional farming.

Greenwave helps the new entrants get permits; gives them free seed for two years and winter clothing supplied by Patagonia, and connects them with a market whose demand currently outweighs supply. That has helped to drive up the price of kelp to about $1 a pound, allowing successful farmers to make a handsome living.

Before he began working full-time on the replication of his model, Bren made an average of $10,000 a year in annual revenue from kelp on each of his 20 acres of ocean over about a decade. The resulting $200,000 added to around $100,000 that he made each year from shellfish. About half of the total revenue met the costs of the business, leaving about $140,000-$150,000 a year in profit. “Income varies from year to year depending on the yield”, Bren said.

Despite his own financial success, Bren urged would-be entrants to first consult universities or other experts on whether local ocean conditions are right for farming. They should then run a pilot program to test the viability of the targeted area before deciding whether to quit their jobs and plunge into ocean farming.