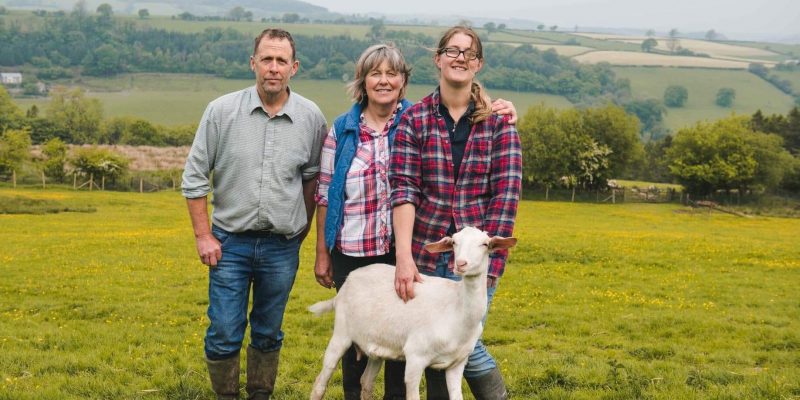 “You need to do something that no one else is doing,” says Richard Beard who runs Cothi Goats, a 49 acre farm in mid-Wales alongside business partner, Lynn Jeffery. The farm is currently enjoying a growth in sales as goat products have been tipped as a top food trend for 2019 by The BBC Good Food Magazine.

With form for innovation, Cothi Goats was originally the first producers of goat’s milk halloumi and feta cheese in Wales. However, Richard and Lynn have recently changed tack and now produce a premium range of artisanal viennoiserie. Using their own goats’ milk and cheese as ingredients, they produce a premium range of croissants, sweet tartlets and savoury puff pastry pies. “We attend markets twice a week and everything that we produce is made by hand on our farm,” says Richard, “Baking has taken over from where the milk products took off and is a great way of adding value to our goats’ milk.”

The farm is home to a herd of 70 milking goats, 15 sows and 30 sheep. “We’re sustainable by default because of our small size,” says Richard, “We’re not organic as it’d be hard to justify the price of organic feed, however our goats are free ranging and we don’t use antibiotics routinely.” Manure heaps are rotated onto the land which in turn yields grass and silage for the goats. “We don’t cut our hedges and there is plenty of wilderness for the birds,” says Richard, “We’re simply a typical non-intensive hill farm.”

Lynn and Richard moved to Wales 16 years ago from Kent, “We wanted to farm goats because they breed so well,” he says “But our biggest challenge early on was adapting to land which had previously reared sheep.” The goats were initially blighted by worms and it was only after numerous tests that they switched their goats onto sheep wormers instead as the parasites were still in the land from the previous occupants, “We lost 15-20 goats before we realised that,” says Richard.

The farm employs one part time member of staff, along with daughter Laura, who works full time. “Everything we produce in the bakery must be made on the day of sale to avoid bulk refrigeration,” says Richard, “The catch is that we can’t resell so we are really careful with our stock to ensure we sell out.” Richard attends festivals throughout the year to boost income and favours customer contact, “I prefer direct selling because it suits our business better than wholesale,” he says. Essentially self-sufficient, farm income is also supplemented by the occasional sale of weaner pigs.

Advising aspiring food producers, Richard says “Search for tacks that others haven’t thought of and keep a step ahead of your competition. Be realistic about your business model and always plan for the worst-case scenario. Keep your products honest and enjoy what you’re doing.”