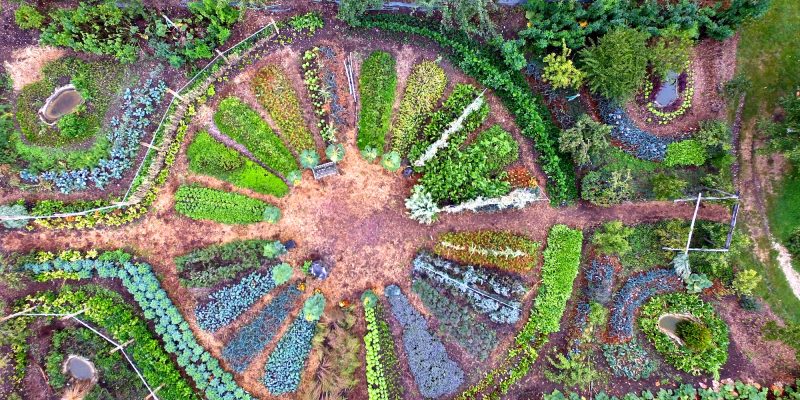 Could this couple’s farming methods be a solution to the climate emergency?

It started out as an idealistic project; one couple wanting to reconnect with nature. It became a ground-breaking experiment which has surprised scientists and confounded conventional farming wisdom. By abandoning mechanisation and working “with” nature, Perrine and Charles Hervé-Gruyer have proved that small-scale farming by hand is not just economically viable but can grow more food per metre than conventional mechanised methods.

In 2004, Perrine gave up her job in international law, Charles his career in sailing, to try to make a living from farming, using sustainable and ecologically restorative methods. They had no expertise or previous experience in growing. Charles said: “We were on a quest to reconnect with nature, with our health, with our body, with seasons, with plants, with animals, so it was a very idealistic project. Above all, we hoped to become self-sufficient for our entire family, to produce healthy things, to feed our children, to share with our neighbours. One thing leading to another, and we decided to become farmers.”

So, they created La Ferme Biologique du Bec Hellouin in Normandy, France. They took inspiration from different growing practices from around the globe and combined them with the latest science to develop their own ‘ecologically sound’ and bio-intensive growing practices.

The amateur farmers were met with scepticism from the local community at first; branded ‘organic hippies’ and doubted for their unorthodox methods of abandoning mechanisation. However, their neighbours soon came around once the impacts of their successful venture started to be felt; with tourism and media attention increasing. La Ferme Biologique is now a leading centre for the practice of small-scale ecological permaculture and has received international recognition from scientific institutions and leaders in their field. Charles said: “The farm has had an important economic impact. When we arrived, the Abbey in Bec Hellouin was the third most visited tourist site in the county. But now the Tourist Office receives more calls about our farm than about the Abbey,” said Charles.

The underlying principles of permaculture to which Perrine and Charles adhere involve working “with” nature rather than against it; to facilitate highly productive crop growth while maintaining or even increasing biodiversity on the farm and have a positive impact on the ecological and climate environments. They operate a ‘no-dig’ farm, where their crops are grown in raised beds or polytunnels and mulch and other organic material is added from various sources, such as their pond, local stable manure and from the pruning of vegetation around the farm. These rich resources offered by nature mean they have no need for mineral fertilisers and pesticides; chemicals which have proven harmful ecological impacts. Different crops are grown side-by-side and rotated over the year, and they are still adapting their practices to discover which varieties grow best together and in different environments. The landscaping of the area has been altered to facilitate running water, and they work the land by hand; insisting a little elbow grease are more effective than machines.

Charles said: “Working by hand means that small spaces can be incredibly productive; with at least ten times higher yield than in organic mechanised farming. That means that we produce the same amount of vegetables in an area which is ten times smaller. We use nine-tenths of the land to plant trees, welcome animals, create ponds, hedges, gardened-forests; a very complex and diversified agro-ecosystem. Nature is extremely productive, and by trying to simulate life processes, we get an abundance of fruits and vegetables.”

The farm stretches across 20 hectares in total and includes woodland, orchards and free-range livestock pasture. The site produces over 380 varieties of fruit, vegetables, herbs and medicinal plants. Vegetables are grown on approximately 3,500 square metres (approximately 0.9 acres). They supply local customers and high-end restaurants alike and can produce up to 100 veg boxes a week.

In 2011, Perrine and Charles decided to prove that their methods are economically sustainable by putting them through a scientific test. With the help of a research team led by François Léger of AgroParisTech, and in partnership with the French National Institute for Agriculture Research, they undertook a scientific study to prove that small-scale permaculture could be equivalent or even superior to traditional methods in terms of its economic viability. The study was conducted over four years, with an area of 1000m2 (or ¼ acre) of growing space used. The plots were measured down to the square centimetre, and the input of organic material to the site and quantities of produce removed meticulously recorded. The results of the study are conclusive; the output achieved from 1000m2 of gardens is enough to support one person, full-time, working 44 hours per week, with €54,300 net gross sales a year, through vegetable sales alone.*

And the couple say their methods are ecologically sustainable, too. Their bio-intensive methods increase the opportunity for carbon capture and storage and nutrient availability when compared to conventional agriculture practices; improving the soil for further growth while also having a positive impact on the environment.

The couple believe that working small can have global effects. According to Charles, “each one of these small farms can become a carbon sink, an oasis of biodiversity, a place where the soil is regenerated, a place where abundance is created for local communities”. And, the positive results of their study and the impacts their methods have on the local environment have caught the attention of European agencies responsible for planning food security strategies. “If this approach, inspired by the natural world, and which creates abundance, is spread rapidly, then perhaps a catastrophe can be avoided. There is an unimaginable potential to be gained the day that these simple techniques inspired by nature start to be dispersed around the billion small farmers,” says Charles.

The couple are passionate about spreading their word and educating others on how to live more sustainably. Their book, ‘Miraculous Abundance: One Quarter Acre, Two French Farmers, and Enough Food to Feed the World’ charts their journey into permaculture over the past 10 years and provides a source of inspiration and guidance for those who wish to move into sustainable agriculture. In May of 2019, they released a manual for ‘amateurs and professionals’ alike. It comprises three hardback volumes which provide information and techniques on how to create, from start to finish, an ecologically sustainable permaculture farm. It is currently only available in French.

And Charles’s message for those starting out in the world of permaculture farming? “Begin with a small area and concentrate on getting the very best out of it”. They certainly did!

If you want to find out more about La Ferme Biologique do Bed Hellouin, you can visit their website at: www.fermedubec.com.

* Editor’s note: many farms using these high productivity methods operate at a minimum of a 60% margin, so this works out at an earning to the farmer of around £30,000 from ¼ of an acre.