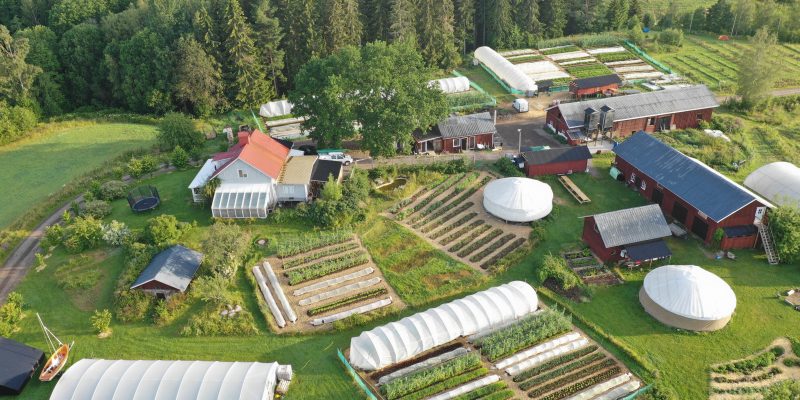 Youtube pioneer shares the message of regenerative agriculture from the frozen North.

Richard Perkins is up for a challenge. He farms in a harsh environment, with short summers and a few frost-free months. Yet he runs a successful regenerative agriculture business and is one of the ecological agriculture world’s most widely followed commentators and educators.

Richard is co-owner of Ridgedale Permaculture, a small farm of 10 ha on latitude 59° North in central Sweden, roughly on a line between Oslo and Stockholm. As well as farming there, he has written two books, runs intensive training courses about farm-scale Permaculture and Regenerative Farming, and has a YouTube Channel with 100,000 subscribers. He has travelled extensively on four continents spreading the word about sustainable small-scale farming.

“Sweden is a harsh environment to farm in,” Richard says, “you only have three-and-a-half guaranteed frost-free months, it’s dark much of the time, apart from the short explosive summer when it’s light pretty much 24 hours. Despite this, we produce a whole human diet; from dairy to pastured meats to vegetables, and gather mushrooms and wild foods. Sweden has abundant stocks of fish and meat walking through the forests, so at the time of year when we can’t grow our own, we concentrate on harvesting the wild yields.”

Ridgedale itself is only 25 acres: “Not big enough to qualify as a farm under modern standards,” Richard says. Yet it is productive enough to turn over more than the value of the farm and investments every season as well as feeding the family and a team of permanent workers, as well as the participants of training courses for the duration of the growing season.

Richard runs Ridgedale with his partner Yohanna Amselem who has a degree in Gardening specialised in Health and Design, is a pioneer of cooperative living at a commune near the Swedish capital Stockholm, and helped to set up a cooperatively managed local organic/beyond organic food outlet.

Ridgedale Permaculture operates according to the concepts of holistic management; a way of living which involves sustainably producing crops or livestock to provide farmers with a livelihood, while also having a positive regenerative effect on the ecosystem around them. That’s what Richard teaches: a set of principles which increase biodiversity and carbon capture, improve soils and water supplies and enhance the natural ecosystem resulting in increased yields and more sustainable and adaptable farm practices.

The farm itself includes pasture, forests, and freshwater streams set over a sloping landscape. It makes the most of the natural movement of water across a landscape to better deliver moisture to the plants. The vegetable crops are grown with a no-dig approach, no tillage happens on this farm at all. Free-range animals are allowed to graze through strips of agroforestry, which produce fruits, nuts and berries.

Richard explains: “Building soil is fundamental to the future of any of our agricultural systems; if you are not building soil, you on a downhill spiral. A lot of this is not new; people have known how to maintain good soil health for a long time. Despite all the rhetoric around farming being destructive, there have been good farmers all around the world for thousands of years, and we need to apply modern science to some of these old principles. And we need to think about whole systems which require animals, annual plants and perennial plants. There’s no real way around that if you want to have an ecosystem which regenerates and build in health and diversity. The beauty of it is that soil is really easy to build; it’s easy to destroy, but it is also really easy to build.”

Visitors to Ridgedale can learn about farm design, market gardening, pastured poultry and more during the busy growing season. Participants stay on site in the farm-style accommodation provided, cook with food fresh from the field, and contribute to the daily running of the farm alongside their studies. Richard says: “While our foremost responsibility is regenerating our own landscape, ecosystem processes and soils through resilient, replicable, scalable and profitable farm enterprises, our secondary function is to educate, facilitate, inform and empower people into action through regenerative design, enterprise and holistic decision-making that fosters and stimulates local community, economy and resilience. Part of our vision is to be able to offer people experiences that can really empower the design approach and practical skills we see as necessary for profitable farming. We are excited about facilitating the next generation of entrepreneurial young farmers getting set up profitably on the land.”

Richard holds a Diploma in Applied Permaculture Design (UK) and HND Organic Crop Production (UK). He has studied extensively in multiple fields including Permaculture design, Holistic management, No-Dig Market Gardening and Keyline Design. He has led 50 solo Permaculture design courses and contributed to over 160 agricultural projects around the globe. And he is now spreading the word about sustainable agriculture around the world, and inviting others to join in, too. You can access 80 hours of online training courses in Farm Scale Permaculture Design and Regenerative Agriculture via subscription or buy Richard’s book in hard back or PDF E-book form on their website. Richard also tours around Europe lecturing and attending seminars. And he makes films about other successful sustainable agriculture projects, in which he asks fellow farmers for detailed information about finances, challenges and problems. “We’ve got to keep it real,” he says, “it’s a great way to make an unprecedented amount of information, available freely to the world.”

Richard said: “I knew from an early age that I wanted to be in farming, having learned from Romany Gypsies in the UK how to live sustainably off the land. There is a lot to be gained from looking back, to systems which had worked in the past before the global food market changed everything.”

If you want to find out more about Richard’s Book or Courses, or about Ridgedale Farm, please visit their website at www.ridgedalepermaculture.com.