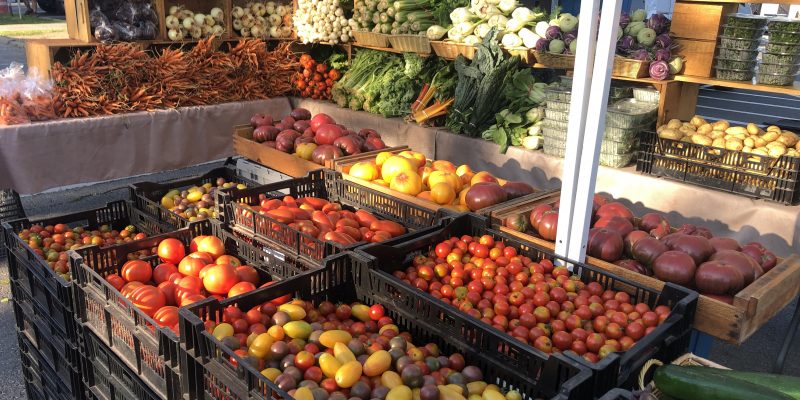 How a former computer engineer made farming simple and profitable.

When Conor Crickmore left city life behind to start smallholding in the Catskill Mountains in New York State, he knew life would be hard. But when he realised he was earning “pennies per hour” for a 12-14-hour day he knew something had to change. Now Neversink farm turns over $350,000 a year from just 1.5 acres of permanent beds, and he says it is among the most productive land per square foot in the County.

Conor had spent most of his adult life working as a computer science consultant in Brooklyn, “working in a cubicle, drinking beer and eating oysters in an expensive apartment.” But he moved to the town of Neversink in Sullivan County after he married his wife, Kate. They had a small plot of land and $30,000 in working capital: “We weren’t going to farm,” Conor said, “just grow our own food and sell any excess to make a living.”

They began producing a wide range of products; not just vegetables but chickens for eggs and meat, bees for honey and even trout. But they found it required long hours of hard work for little gain. “It was just really, really hard,” Conor said, “in the first year there weren’t many moments when you sat back and thought ‘this is going well’, but I was optimistic. Starting a business is an incredible sacrifice in the beginning; there is no way around that, but we wanted to build something that is going to be easier later.”

So, Conor fell back on his experiences as a computer consultant. “What I did really well when I was in Brooklyn was I made large computer systems work really fast and simply. Our early experiences on the farm made us realise we had to ‘systematise everything’. As soon as we did that the farm started turning around. I wish I could say there was an ‘Ah-hah moment’, but it was really just a set of small changes which were the beginning of what we do now.“

The couple identified systems or techniques which reduced their efficiency and removed or modified. “We needed to get from A to B with as fewer steps as possible, but also have steps that workers could do.” They doubled their productivity in their second year.

One of the most significant changes was replacing their tractor with hand tools and stop tilling the soil by machine. Conor said: “We practice farming by hand; replacing the tractor with hand tools. All planting, cultivation, and harvesting is done manually. However, we use modern tools and techniques that keep us efficient and competitive. We find that farming this way is easier, more productive, and can produce vegetables of higher quality. By only loosening only the topmost soil layer, they maintain the soil structure and high levels of beneficial organic matter and microorganisms which aid crop growth.

Neversink use intensive planting and growing techniques. The permanent outdoor beds are replanted constantly throughout the season from early April through late fall. Their polytunnels produce vegetables year-round: “We do this by maintaining extremely fertile soil. As a result, we do not need to leave fields fallow. We believe that farming this way creates healthy vegetables resistant to diseases and pests.”

Conor also describes Neversink as “the weed-free farm.” By planting seedling intensively, they reduce the available space for weeds to grow and compete with their crops, but they also use their limited soil space more efficiently. Tomatoes and cucumbers are grown in greenhouses where natural predators of pests, including indigenous snakes, can be released to control their spread.

Their success has allowed them to sell more vegetables. They have been involved with a community-supported agriculture (CSA) programme, opened an on-farm shop, and regularly sell to farmers markets and to restaurants. “We used to do farmer markets locally, but we continued to outgrow them. Instead of adding more and more farmers markets, we just worked on getting bigger and better farmers markets.” Chefs in the gourmet food sector in New York City are willing to pay higher prices for organic produce, and this is where Neversink achieves most of its sales.

Now that Neversink have achieved their goal of high productivity using sustainable, organic, no-till agricultural methods, Conor wants to help others achieve the same; from educating other small-scale farmers to create more efficient, profitable farming systems to encouraging non-farmers to move into home gardening and become self-reliant. Neversink’s online presence has grown to include Conor’s Instagram, which has over 50,000 followers, and his YouTube channel, which has hundreds of videos on the agricultural techniques implemented at Neversink.

Conor has also developed online courses in both Vegetable Gardening and Market Farming; with the latter achieving hundreds of members. Spanning nine core modules from soil structure to product marketing, with additional mini-courses on specialised areas and techniques, access to member discounts on tools and supplies, and regular Q&A sessions with Conor himself, this course covers all aspects of small-scale intensive agriculture, using the techniques developed by Conor at Neversink. Member discounts also apply to a range of hand-tools specifically designed by Conor to aid you in the no-till, hands-on farming methods he advocates.

The course material consists of 140 video lessons, each of 25 minutes, as well as downloadable PDFs; all of which are being expanded and updated as Conor continues to develop new and better methods – it truly is a tool that keeps on giving. Eliot Coleman, a leader in the field of organic, intensive agriculture who inspired much of Conor’s early work on the farm, has commented on the success of the course: “At this year’s Young Farmers Conference two couples who had worked here and are now off starting their own farms raved about how much they had learned from your course. Great endorsement.”

The success of its members is showcased on Neversink’s website, with links to dozens of new farms inspired by and built upon the lessons learned from Conor. One member and farmer writes, “It was hands down the best thing we’ve invested in so far. A first full season on, working about 1.4 acres, several unexpected issues, and we’re still slated to gross about $140K this year.”

If an online course is not for you, Conor sometimes offers on-farm day-long workshops on market farming and vegetable gardening at $375 and $250 per day, respectively. These workshops give you an opportunity to really experience the farm and learn some of Conor’s methods first-hand. For a more relaxed approach to learning, Neversink has recently launched their Barn Dinners: an “immersive culinary and agricultural experience” which highlights produce from the farm and local suppliers, and integrates classes in farming, fermenting, foraging and food production into the meal experience. Additionally, the farms 100-year-old renovated barn can be hired for events such as weddings, with full catering available using produce sourced by Neversink.

If you want to find out more about Conor Crickmore and Neversink Farm, you can visit their website: www.neversinkfarm.com.