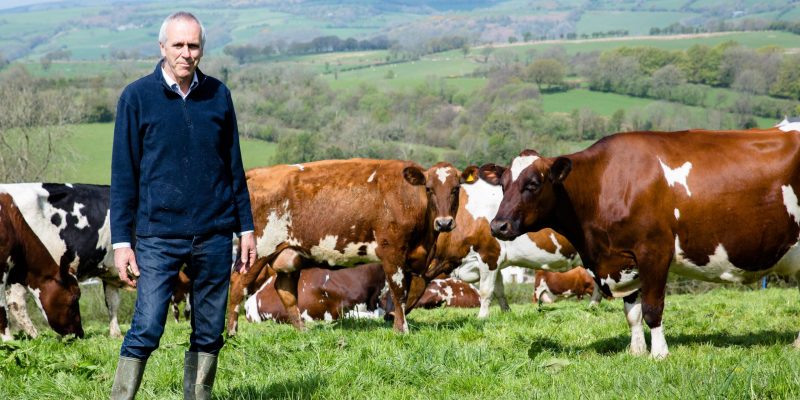 Artisan cheddar, Hafod, is key to the viability of this dairy farm.

How do you build a sustainable business with an undervalued commodity when the economic odds are stacked against you?

Organic farmer and producer of award winning Hafod cheese, Patrick Holden knows how and has gained valuable insights over the last 40 years on his organic dairy farm in west Wales.

“It’s difficult for farmers who aren’t lucky enough to have a day job or a premium market,” says Holden, “Buyers of organic milk destined for supermarkets pay less than 40p a litre, whereas it costs small-scale farmers like ourselves more like 50p a litre to produce.” By adding value and making cheese on his farm, Holden has found a solution.

The farm began as a communal venture. Ayrshire cattle were chosen as a consequence of a discussion with the neighbour who pointed out that Ayrshire cows would suit the farm’s soils pastures and climate. The composition of Ayrshire milk, with its small fat particles and balance of fats and proteins was also highly suited to cheese making.

Dairy has always been the main focus of the farm but up until the early 2000s, organic carrots provided the farm with a cash crop. However, when supermarket depots became centralised, overnight logistical costs shot up prohibitively for farmers. The farm was forced to look for another income as milk sales alone were not enough. Across the UK, small scale dairy farmers were being forced out of business. The price of milk had plummeted, driven down by ‘factory dairies’ swamping the market with cheap milk, produced with little concern for animal or environmental welfare.

A timely visit in 2005 by the Specialist Cheesemakers Association sparked an idea and reinforced the benefits of the choice of Ayrshires.

“Most specialist cheesemakers at that time were not farming organically and mostly they had Holstein Friesian cows,” says Holden. The SCA believed milk from native breed herds raised organically could produce outstanding cheese. They wanted to educate their members and Holden’s farm was a case in point.

Following the visit by the SCA, Holden’s son, Sam took on the cheese project at the farm, “We borrowed £300,000 to finance the project and made our first Hafod cheese on the 26th August 2007,” says Holden. Hafod has since won multiple awards and ultimately, the success of Hafod shows that small scale, organic dairy can still be a viable farming choice if combined with adding value – which in Holden’s case, is making cheese.

The 300 acre farm was one of the first certified organic dairy farms in Wales. Today it has a milking herd of around 80 cows, with 50 young stock. “We’ve been farming this way with no brought in nitrogen fertiliser for 46 years and the system works,” says Becky, Holden’s wife. “We’re steadily building soil organic matter, taking CO2 out of the atmosphere and building up precious top soil.”

Quality is carefully managed by in-house production. A third of sales are made in Wales and the rest sold by wholesalers worldwide as far as Australia. 20% of the milk is sold locally to an organic co-operative, “It means we can sell our surplus milk when we’re not making cheese,” says Holden.

Finances have been tough, “We derived no income from the farm for a long time,” says Holden, who until 2010 was Director of the Soil Association, a post he refers to as his ‘day job’. However he says, “The farm could have worked had I stayed on as a full time farm worker but I had another mission.”

Finding labour has been another hurdle, “But I think it’s beginning to change now” says Holden, “Increasingly we’re getting interest from people who want to come and learn.”

For those new to farming, Holden says, “Work on the land, acquire skills through practice. Apprentice yourself to farmers and growers, learn from them and network with the many communities of young people who want to get back to the land.”