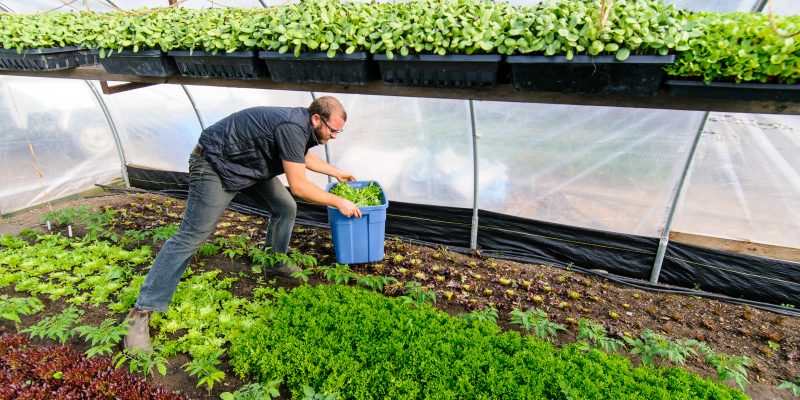 If you think of a farmer, you may think of ‘countryside’ and ‘landowner’, but in Curtis Stone’s case, you would be wrong. He calls himself “The Urban Farmer” and runs a successful farming business in a city, on 1/3 acre* of land he doesn’t own.

Curtis is founder of Green City Acres farm in Kelowna, British Columbia. He is pushing the boundaries of traditional agriculture by earning CAD$100,000 by growing microgreens, salad, cherry tomatoes and baby root vegetables in five neighbours’ gardens. In exchange for the use of their land, they get free baskets of food and Curtis sells the rest of his produce in farmers markets and nearby restaurants. It’s enough to keep two people working full-time during the growing season and part-time for the rest of the year.

“People want food from the farmer, they want that connection,” Curtis says, “they want to know where it’s coming from and restaurants are willing to pay a premium for it. There’s such a demand in the city for local food. Urban farming has the potential to really create a whole new system here in the city. Young people can do this without owning land because there’s lawns and nooks and crannies of places, gardens with empty spaces and empty lots that people can occupy and grow food in.”

This method of farming is known as Small Plot Intensive (SPIN) farming. It aims to produce a larger than average volume of crops from a small area with minimal upfront costs – a method which is perfectly suited to urban environments. Curtis plants fast-growing crops and rotates them regularly; once one crop is harvested, another is immediately planted. He uses greenhouses to lengthen the growing season and volume of crop per harvest. By focusing on high-value vegetables, he has been able to successfully grow the value of his business without expanding his acreage or his workload. Curtis delivers the majority of his produce by bike. He can be regularly seen hauling trailers of vegetables and agricultural tools. In 2012 he used just 80 litres of gasoline across the entire year to deliver produce.

“Everything we do in life, whether it’s buying a can of coke, driving your car whatever we do is destructive. I’m really excited about getting to the point where everything we do is a reflection of what happens in nature; everything creates more life, builds soil fertility, purifies the air. I don’t think that having an economy like that is impossible,” he says.

Curtis has achieved an international following as ‘The Urban Farmer’ for his innovative approaches to farming and marketing. He has over 40,000 Instagram followers and almost 400,000 subscribers to his YouTube channel. But he did not start out this way; Curtis had no previous experience in farming; he was a self-professed ‘struggling artist’ who worked as a tree-planter during the summers to fund his music career. His journey into farming begun with a 4000-kilometre bike tour from Kelowna to Tijuana, where he visited farms and eco-villages along the way and developed a desire to become self-sustainable. “I wanted to get myself off, as much as I possibly can, the globalised machine of destruction.”

However, venturing into traditional agriculture can be a daunting thing; acquiring land to start out is expensive and often requires mortgages or loans. “I wanted to be a homesteader, but how can you do that if you can’t buy land… I wasn’t ready to sign my life away for a 30-year mortgage just to live off the land and then work for the bank.” Instead of following the traditional route, Curtis decided to try something a little different. Inspired Wally Satzewich, the creator of SPIN farming, Curtis began renting land from local homeowners in the city to provide a starting canvas to start growing. Following traditional farming methods and techniques, he made a modest profit in his first year. Still, his calculated hourly wage was less than CAD$1.50 per hour. Clearly, something had to change. He spent months researching intensive farming techniques, improving his storage and processing of his produce and marketing to local food outlets, and in his second season he grossed CAD$61,450; over three times that of the previous year.

Curtis’s success motivated him to reach out and draw others into the world of sustainable urban agriculture. “When I’m not farming, I’m talking about farming. I’m going out on the road and teaching workshops and giving lectures at universities and trying to engage young people in doing this… I want to be part of social change.” On his personal website, theurbanfarmer.co, you can purchase various courses and workshops on urban agriculture. Curtis and Luke Callahan of Local Business Plans, a company devoted to helping small businesses succeed, have developed a 10-week self-study course. It guides users step-by-step on how to make their urban farming venture successful.

Curtis has also published a book, ‘The Urban Farmer’, a “practical, hands-on manual to help you learn the techniques and business strategies you need to make a good living growing high-yield, high-value crops right in your own backyard – or someone else’s.” The book can be purchased alongside an audiobook and digital tools package which includes 9 video tutorials from the online course, or on its own for just under USD$20. Much like the course, The Urban Farmer focuses on successful marketing and business growth models to drive production, and provides information on costs, business development and the best cropping and production techniques to make profit. “How you design your garden and how you design your farm is totally dependent on what your market demands, but that’s the biggest advantage of farming in the city is you’re in the market, you’re right there.”

And Curtis’s message to all those thinking of moving towards a more self-sustainable lifestyle?: “We need to start growing our own food, building things and creating physically the world we want to live in. That means getting our hands dirty. We all have to get involved.”